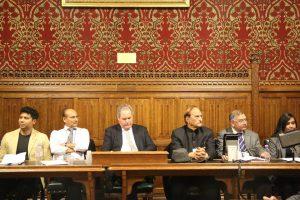 LONDON: Pro-caste activists have intensified their campaign to lobby and pressurise the British Parliament to stop it from making caste discrimination a crime in the UK.

Ahead of a consultation expected to be conducted by the government before Christmas on whether caste discrimination should be treated as a race crime in UK, last week, 23rdh November, Indian Forum on British Media organised a debate in a committee room of House of Commons that was addressed by pro and anti-caste activists in which anti-caste supporters gave horrific details of caste crimes being committed against Dalits and other low caste Hindus in Britain.

Citing references from books, reports and surveys and substantiating their arguments with proofs, they demolished the arguments of the pro-caste speakers.

Anti-cate discrimination and human rights activists say that casteism in Britain is as rampant as in India. 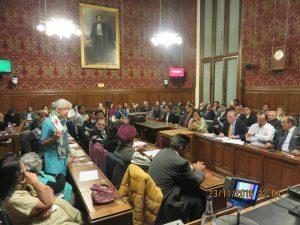 Among those who have been opposing criminalisation of caste discrimination is Conservative MP Bob Blackman, representing Harrow East and Labour Party MP Virendra Sharmarepresenting Southall. Both have the presence of a large number of Hindutva supporters in their constituencies.

Mr Blackman told the audience that he had been, “involved with the British Hindu community for more than 30 years and what I can say is that the issue of legislation on caste has most certainly generated more interest and more involvement from the British Hindus than any other issue.”

He said, “I think that caste should not be legislated in this way. It should be removed from the statute books as the protections against discrimination in general are already there.”

However, how strong and how deep rooted is caste consciousness in Britain could be felt during the speeches delivered by anti-caste legislation. A young speaker, Ridhi Vyas, probably in her late 20s and most probably born and brought up in Britain, for example, went as far as defending casteism as a “way of life”.

She said, “Caste is not something that lasts. It depends upon one’s attributes one’s skills and one’s values. What one does one do to make that point in society”

Much to the amusement of the audience Ms Ridhi Vyas interpreted the Varna system by giving analogies and calling Brahmins as intellectuals, researchers and the seekers of knowledge like Alexander Fleming and Albert Einstein who, she said, had invented the light bulb. After the debate when one of the attendees asked Ms Vyas about the source of her research she said “Bhagwad Gita”.

Kshatriyas, she said, is the group that are “interested in power”. She said it was created on the basis of “social contract theory”. Vaishyas, she said, “are merchants. They are interested in knowledge but are obsessed with capitalism. They make the society go around. They are, actually the people who put money into the business to make it work.”

She refrained from defining the status of the fourth category i.e. the Shudras and, instead, questioned the relevance of the inclusion of caste discrimination in the UK because there are tribunals to deliver justice to people who face discrimination at work.

Before her moderator of the debate, Bhanu Sisla had enlightened the audience that there was no mention of caste system in Hindu scriptures and was that it was the invention of colonial rulers.

However, Chairman of Caste Watch UK Satpal Muman, who has been dealing cases of caste discrimination in the UK thrashed the opponents of anti-caste legislation. “There have been a lot of lies about the possible impact of legislation.” He said.

Mr Muman stressed that he represented a secular and “primarily a victim based organisation, victims who have faced caste discrimination…in this country.”  He said, “There have been a lot of lies about the possible impact of legislation.”

He emphasised that Caste Watch UK is “primarily a victim based organisation” and helps “victims who have faced caste discrimination…in this country.”  He said, “There have been lot of lies about the possible impact of legislation.”

Mr Muman said, “It has brought out the worst reactionaries from amongst the Hindus and some sections of the Sikhs. These groups have resorted to all manners to beguile and befool the community.”

Mr Muman continued, “A campaign of vilification was started targeting the MPs who had authored the caste legislation. Newsletters and leaflets were circulated. Newspaper reports emerged of people being physically attacked by the opposing people in North London. A letter written by an alliance of Hindu organisations, dated 20th March 2014, stated, ‘The word Caste must not remain in Legislation, its continued use is an act of anti Hindu racial and religious violence and prejudice of the highest order.’ On 8th of My 2015 a newsletter was written advising Hindus as follows, ‘With the elections coming up in the UK there are many organisations and parties that are encouraging Hindus to be active by voting in this general elections.’ It said, ‘But do not let it to be a blind vote. You should know the issue’ it said, ‘For Hindus, for Sikhs and the Jains the caste laws in the equalities act is one of the biggest issues facing in this election. It is a main feature of Dharma Raksha campaign’. It means that introducing caste in the legislation is an attack on the Hindus, Sikhs and the Jains. The newsletter encouraged its supporters to seek out MPs and vote against for supporting the caste legislation.’ There was also a manifesto in 2014 issued by the Hindu Council UK. In section 6 it stated that the ‘Hindu Council seeks repeal of the caste legislation.’”

Mr Muman added, “This was the first time in the history of the British elections that caste became a major factor when a section of Hindus and the Sikhs, in the name of Dharam Raksha, protection of religion… launched a vociferous campaign to vilify parliamentarians, to the effect of accusing the Archbishop, one of the champions of caste legislation’ of launching propaganda and ‘religious intolerance’.  It further accused the British Parliament of a continued ‘colonial mind-set’, serving prolonged vested interests and taking sides with the British colonialists and Christian propagandists.’

Mr Muman rejected the interpretation that casteism was the invention of British colonisers and said that Manu Smiriti was written around 4th century AD when the “British race was not even invented.”

He quoted Guru Ravi Das and Guru Nanak who had written against caste system long before the British came to India.

Trying to allay the fears of those who thought that anti-caste legislation would be detrimental to religious Aparnati said, “Cast supremacist are only obsessed with caste supremacy by any means possible including the use of religion…If anyone brings religion into the base it’s the caste supremacists not the victims. For the victims it’s justice.”

Aparanti cited examples of young men being refused to be served by a taxi driver, elderly women being refused caring by care workers, young boys being bullied in schools and individuals being treated as second class citizens because of their castes.

Challenging the notion that British were responsible for bringing casteism in India, Aparanti referred to anti-caste stand taken by various luminaries in history and asked, “What explanation is there for the Budha breaking away from this twelve and half thousand years ago in rejection of the caste system?” He said that Dr Ambedkar was able to have access to education only because his father had served in the British army. “History is witness to the battle of Koregaon in 1818 in which 500 untouchable Mahar soldiers defeated the caste supremacists Peshwa army of 25,000 for the British East India company…They did it because these caste superpacist Peshwas deliberately discriminated against them to such a degree that they would rather fight for the foreign power.”

George Kunnath, a lecturer in Modern Indian studies at the University of Oxford, narrated his experience and observations as a researcher in Bihar. He said he was able to challenge the supremacists because he was not a Dalit.

Mr Kunnath said that casteism is practiced all over the Indian subcontinent in various forms and existed in Islam and Christianity as well.

After the debate this scribe reminded Mr Kannath that it was tragic and shameful that casteism exists among Muslims of the Indian subcontinent but far from being part of Islam it is against Islam.

How ironic and how tragic is it that the religion whose scripture enjoins equality of human beings and whose Prophet (PBUH) had left no confusion left about this issue by telling his followers: “An Arab has no superiority over non-Arab, nor a non-Arab over Arab, nor a white over black, nor a black over white. All humans are the issues of Adam and Adam was made of clay…” has been defamed by his followers. On the day of Judgement Muslims of the Indian subcontinent will have no explanation for this crime.

Following the debate, writer and activist Amrit Wilson of South Asia Solidarity, who has authored many books on South Asian women in Britain, reminded the audience that the women were the worst sufferers of caste based discrimination in UK.