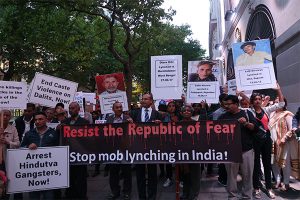 London: Members of Indian diaspora in London have marked  India’s Independence Day, 15 August, by marching against the increasing trend of mob lynching in India of Muslims, Christians and Dalits.

A sombre and solemn procession of more than 200 activists belonging to human rights groups, Dalit and Christian organisations gathering at Tavistock Square at Mahatma Gandhi’s statue marched towards the Indian High Commission.

Throughout the procession there was no slogan shouting and the only noise was of traditional funeral drums usually played in Sri Lanka by Dalits.

Marchers held in their hands torches and candles, large portraits of Junaid, Akhlaq and other victims of mob lynching and placards with a variety of messages on them.

“Hindutva is a threat to humanity”, said one. “Value human lives not just cows”, screamed another. “Arrest Hindutva gangsters now”, demanded another.

The only time slogans were raised was when the procession reached the Indian High Commission and the atmosphere reverberated with the chants of, “Modi, Yogi blood on your hands”; “Modi, Modi, you can’t hide, you committed genocide”; “Modi, Yogi shame, shame! No more killings in our names”.

Various activists addressed the gathering at the end of the march in front of Indian High Commission. “Republic of India has become Republic of Fear. We have come here today to say that we will not tolerate religious fanaticism of Hindutva” Satpal Muman of Caste Watch UK said.

Mr. Muman stressed that after Narendra Modi’s coming to power, India has become the largest exporter of beef and the only reason Hindutva gangs are attacking Dalits and Muslims is that they want to deprive them of their livelihoods and let the big corporate houses monopolise meat business. He urged the audience to do their best to expose Indian hypocrisy. 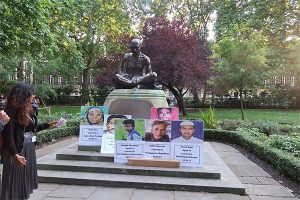 Academic and South Asia Solidarity Group activist Kalpana Wilson said, “We have gathered here today to honour the many, many victims of mob lynching, Muslims, Christians and Dalits and to call for justice in their names.”

Remembering few of the victims by their names Ms Wilson gave their brief backgrounds and took upon Modi for not dealing in his Independence Day address with the real issue of fanaticism.  Reminding the audience that “He is the same man who in his election campaign of 2014 started talking about a pink revolution of beef export.” Kalpana said that the so called cow vigilantes had his patronage.

The organisers have also sent a letter to Indian President Shri Ram Nath Govind demanding, “…that the BJP government put an end to the violence against Muslims, Christians and Dalits and indict not only perpetrators of these horrific crimes but those, including senior politicians of the BJP, who have instigated communal and anti-Dalit violence as well.” And “immediate resignation of Uttar Pradesh Chief Minister Yogi Adityanath who has been one of the most virulent promoters of hate and has callously tried to evade responsibility for the deaths of nearly 70 children in a government hospital in his long standing constituency.” 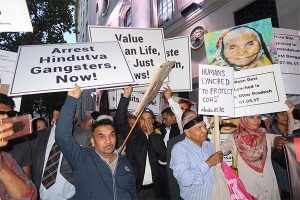 The letter also demands, “Immediate release of Dalit leader Chandrashekhar and his colleagues who were arrested in the wake of protests against the attacks on Dalits in UP.