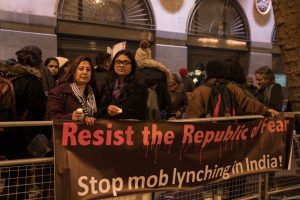 London: Instead of hosting and participating in festivities, the Indian diaspora last evening 26.01.18 marked their Republic Day by organising a protest against Hindutva attacks on minorities and Dalits in India.

Braving chilly wind and freezing cold weather several activists gathered outside the India House and shouted anti-Hindutva slogans. They carried large portraits of the victims of Hindutva including Gauri Lankesh, Akhkaq, Pehlu Khan, Junaid, Rohith Vemula and others along with their names, date and place of their lynchings. The caption on Justice Loya portrait, however, simply read: “Who killed Justice Loya?”

The protest was organised by rights organisation South Asia Solidarity Group (SASG). In her speech SASG’s spokesperson, writer and activist Amrit Wilson said, “We were here last Saturday in the pouring rain. There were about a thousand of us. We had a letter for the Prime Minister and for the President. We were told by the Indian High Commission that they would not take our letter in. They had instructions from the Indian government to refuse this letter. They don’t have to take our letter but we are telling the world and the world is watching what’s happening in India.”

Rutuja Deshmukh of SOAS India Society said, “From the lynchings of Muslims in the name of the cow, to the attack on a school bus over a film, and Justice Loya’ s mysterious death, there are more than enough reasons to conclude that the Indian state is turning into a fascist regime sooner than anyone imagined. It is our duty as responsible citizens to resist this advent of fascism.”

Satpal Muman of the Dr Ambedkar Memorial Committee of Great Britain which also supported the vigil said: “We are deeply concerned about the horrific attacks on Dalits that have escalated vastly under the Modi regime, about the hatred and violence against minorities and on all those who simply tell the truth. We cannot stand by while the democratic fabric of India is being threatened by the rise of Hindu supremacy” 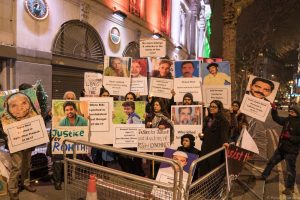 Nirmala Rajasingham on behalf of South Asia Solidarity Group said: “We stand with the many, many Indians who are rising in grief and rage against the horrific violence choreographed by the Hindu supremacist Modi regime and its openly fascist parent organisation the RSS. Here in the UK too these Hindu organisations are spreading their casteist venom and virulent Islamophobia. We will continue to confront them as we pledge to resist India’s descent into a Republic of Fear. “

Om, a Jawaharlal Nehru University student who is on a research tour to the UK and is associated with CPIML said, “I thank all of you for coming here because if there is one thing more than JNU that this government hates is it’s probably people criticising them abroad. International criticism is really something that hurts them.”

Ujjain, a student studying law at Nottingham University recalled the despicable atmosphere and reactions, sentiments of and comments made by Modi supporters on the day when Akhlaq was lynched a few miles away from her residence in Noida. But she said she was at the protest “to speak about a man called G M Saibaba,a former Professor of Delhi University. He is highly disabled and was one of us who spoke up against the atrocities against indigenous people who are asking for their identity and dignity. He is suffering in the prison without any support despite being 90 percent disabled. His bail application is pending and the court, without any evidence which can be accepted under indian evidence act, has convicted him for life saying that he had been committing crimes against the national security.”

A statement issued by SASG read, “As the Indian state gets ready to celebrate Republic Day with a show of military hardware and xenophobic nationalist rhetoric, we stand with those many, many Indians who today are rising in grief and rage against the violence and hate choreographed by the far-right Hindu supremacist Modi regime against its own people. We pledge to resist India’s descent into a Republic of Fear.”

It adds, “This year has seen a continuation of the epidemic of mob lynching in which Muslims have been the main target. Whether the pretext has been claims of eating beef, cattle trading, the so-called ‘love jihad’ or simply travelling while being a Muslim, these attacks have been instigated and organized by the network of vigilante groups and paramilitaries linked to the ruling BJP government and the openly fascist organisation which inspires and directs them, the RSS. Those who have been brutally murdered range from 15-year-old Junaid beaten to death in a train in UP, to Pehlu Khan lynched by cow vigilantes on a Rajasthan road.” 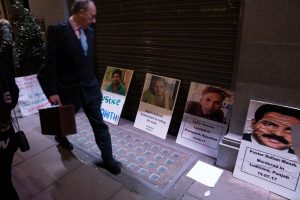 Putting the responsibility squarely on Prime Minister Narendra Modi and his ministers for all of it, the statement says, “Their deaths have been met by resounding silence from the Prime Minister, justifications from his ministers, and waves of celebration from the army of hideously abusive online right-wing trolls, many of whom are followed by Narendra Modi, the man who himself oversaw the 2002 genocide of Muslims in Gujarat when he was the Chief Minister.  On December 6, millions of people witnessed the horror of Afrazul Khan, a migrant worker from Bengal, being hacked to death and burnt alive in Rajasthan, with the carnage being sickeningly videoed and circulated online by the perpetrator and his 14-year-old nephew. That the perpetrator Shambhulal  far from being a mentally disturbed lone wolf was confirmed by the celebrations of his crime and the protests against his arrest organized by the Hindu right wing organizations linked to the government, culminating in the replacing of the Indian flag by the saffron flag (representing Hindu supremacist  power) atop the High Court building in Udaipur.”

The statement gives details of atrocities against Muslims, Chiristians and Dalits and human rights violations in Kashmir and adds, “Meanwhile the Modi government is ruthlessly seeking to silence all those who dissent from its agenda of creeping fascism.  The cold-blooded assassination on 5 September 2017 of the courageous journalist Gauri Lankesh in Bangalore, who had fearlessly criticized and exposed the BJP and its associated groups, brought thousands onto the streets in mourning and protest. While the mainstream media has become a loyal mouthpiece for the Modi government, whipping up hysteria against all those who criticize the government, alternative critical media outlets like The Wire have been threatened with massive lawsuits when they expose the terror unleashed by the Modi regime and its endemic corruption. We learnt also about the suspected murder of Justice Loya, the judge who dared to insist that Modi’s right- hand man Amit Shah appear in court in the Sohrabuddin murder case. And now the interference by the Modi-appointed Chief Justice in the investigation of Justice Loya’s death has led four of the five senior-most Supreme Court judges take the unprecedented step of holding a press conference to  warn of the ‘danger to democracy’ posed by the Modi government.  Meanwhile, BJP leaders like Union Minister Anant Kumar Hegde have openly stated their intention to get rid of the Indian Constitution drafted by Ambedkar and its basic principles of liberty equality and fraternity, replacing it with the caste supremacist and misogynist principles of Manusmriti!

“As India descends rapidly into open fascism, we cannot afford to remain silent.  We must stand by those whose very existence is under threat. We must show our solidarity with the thousands taking to the streets in India in protest against mob lynching, atrocities on Dalits, assassinations of dissidents and the Islamophobic, caste supremacist far-right regime of Narendra Modi.

On Saturday Dalit organizations had held a separate march culminating at the India House. Readers may be shocked to learn that none of the Dalit organisations was willing to mention in their resolution a condemnation of attacks on minorities i.e. Muslims nor did the final draft has it. Only Amrit Wilson of SASG mentioned the pogroms against Muslims and condemned these in the strongest language.

Sad though it is, there is hardly anything surprising in it because the representation of Muslims in any demonstration against Hindutva is almost nil. There are big Islamic centers and organisations run by Indian Muslims in various parts of UK.  And it’s not that the representatives of these organisations are indifferent towards the escalating violence against their brethren in India. They certainly want to raise their voices against these crimes but, sadly, their attitude seems as such that someone else should do this for them. This is difficult to say whether this is simply because of fear or something else.

Majority of Indian Muslims in the UK come from Gujarat most of whom have their inclination towards Tableeghi Jamaat. However, this would be sheer injustice to put the blame of their inaction on their regional background or affiliation with a particular organisation because the attitude of those coming from other Indian states and belonging to various religious groups is not any different. In contrast Hindutva groups are active at every level and this should be borne in mind that it were these groups who lobbied and succeeded in having  the un-announced ban lifted on British visa to Modi imposed in the wake of Gujarat riots of 2002. A leaked report of the British High Commission on these riots had said that it had gone as far as saying that these riots had the, “hallmarks of ethnic cleansing and that reconciliation between Hindus and Muslims is impossible while the chief minister remains in power.”

Commenting on the role of Hindutva diaspora in the west a recent report in Outlook said, “While this professionally successful Hindu diaspora has been extremely protective and highly combative about its own rights as a minority group in the West, at the same time it has been actively supporting majoritarian Hindu chauvinism in home country India. …”